Section I - The Roles and Responsibilities

The security guard may be required to:

A security guard must be able to recognize the difference between a fact and a conclusion. A fact is what actually happened, or is known to be true. A conclusion is a judgment or opinion formed as a result of the facts. Peace officers and employees are only concerned with the facts. With proper facts, they are able to make their own conclusions. An example of a fact would be: "As I came around the corner, I saw two men kneeling at the door. One was holding a crowbar. The door had markings around the lock". A conclusion based on that fact would be: "The men are burglars".

When a security guard writes a report or makes a statement to a peace officer, they must include the following six facts:

Section IV: Authority to Question and Basis for Making Decisions

4.1 Authority to Question and Interfere

A security guard's authority to question people on private property, however, is no greater than that of any private person's. The only difference is that if the person refuses to answer questions, the security guard may ask them to leave the property under the owner's right.

A security guard may physically prevent a person from entering an area within their employer's private property if requested to do by the owner of the property but must only utilize physical contact as a last resort.

The owner of the property has the right to establish certain rules on their property that may not be a part of the Penal Code. For instance, if an employee reports to work whilst drunk, they may be violating an employer's rule. The employer may fire the employee or demote them. The way such situation is handled is between the employer and the employee, and does not relate to the penal code nor does it require police interference.

The nature of security work requires security personnel to be constantly aware of their surroundings, the law, and the mission of private security. Three factors must be taken into consideration when a security guard is making a timely and reasonable decision:

Actions based on poor judgment can lead to legal problems for the security guard and their employer. The security guard must, by law, avoid certain actions. Legal responsibilities and liabilities that affect security guards are presented in this section.

Crimes are detailed within the San Andreas Penal Code. Any person who violates these laws is subject to a range of penalties, ranging from fines to prison sentences. The potential for punishment as a result of violating these laws is known as criminal liability. Acts that can possibly make security guards criminally liable include, but are not limited to:

The responsibility for the actions a person makes or fails to make, with the possibility of being sued by another is called Civil Liability. The legal term "party" refers to a person, company, or organization. When one party believes that they were injured, damaged, or wronged by another party, they may make a lawful claim for damages. The claim, termed "lawsuit", is presented to a civil court where both parties may explain their views to a judge or jury. After a trial, the judge or jury will decide if the plaintiff was wronged by the defendant, and if so, what type of compensation the defendant must provide to the plaintiff.

Infractions are minor offenses of the penal code that only warrant a fine to be issued against the violator. The fine is usually issued on the scene of the infraction, similar to a traffic stop.

Misdemeanors are offenses of the penal code that usually warrant a fine or a sentence in the county jail.

Felonies are offenses of the penal code that warrant a prison sentence and possibly a fine.

In order to perform an arrest for a felony:

If a suspect resists arrest, the security guard is allowed to use reasonable force to subdue the suspect. Reasonable force is that degree of force that is not excessive and is appropriate in protecting oneself or one's property. If the suspect submits willingly, no force is necessary. If a suspect resists arrest, the only force allowed is that which is reasonable and necessary to overcome the resistance.

It should be clear to the suspect that they are under arrest after the security guard informed them of their intention, cause and authority to arrest them.

A frisk is an only quick check to assess if a suspect has a concealed weapon. This should occur after the suspect is arrested. To frisk a suspect, a security guard should follow these steps:

A guard may be held responsible, criminally prosecuted and sentenced to prison for using a firearm on duty if there was not a clear and immediate threat to the guard's life or to another person's life.

10.2 Requirements for Usage of Firearms

Section XI: Usage of the Baton

The baton is considered a less-than-lethal tool and should only be used as such. It should be used in cases of physical altercation or self protection where other lower methods of use of force have failed and a quick reaction is necessary and the use of a firearm would be deemed unlawful and unnecessary.

A guard may be held responsible and criminally prosecuted for striking or severely injuring a person with the baton on duty if there is no reasonable reason for it to be used.

The baton may be used only when: The baton must never be used: A security guard must not:

Below you can see a chart for the baton usage: 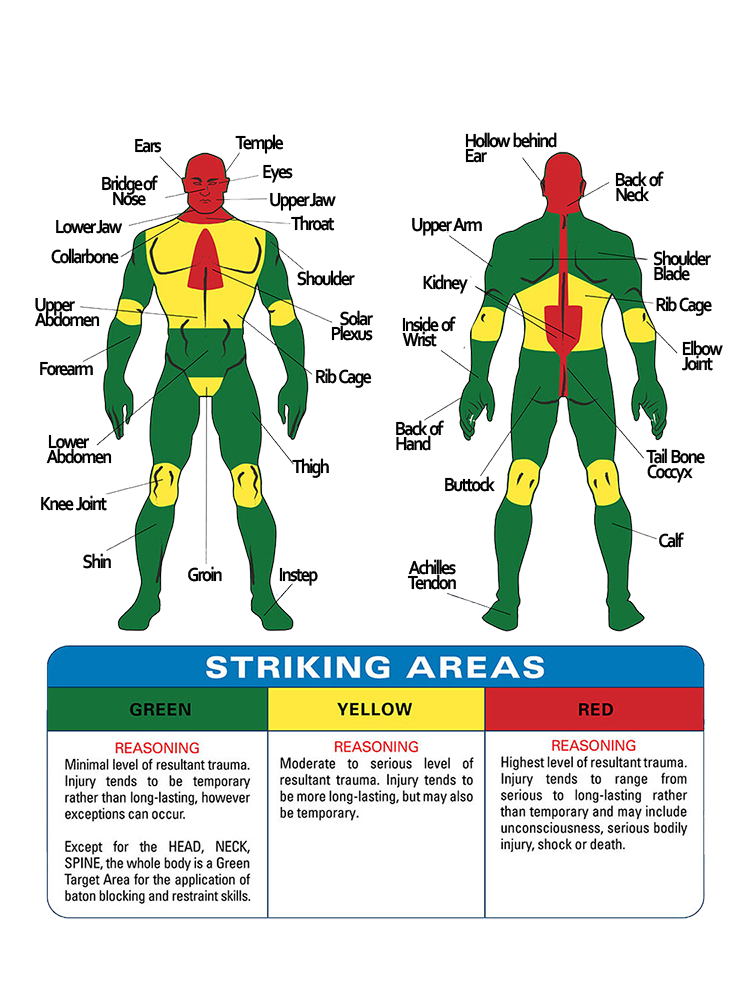 If the baton is used, guards should focus on the Green areas as depicted in the picture above in order to restrain an aggressive individual.

The Yellow marked areas are ONLY to be used in cases where the other striked areas failed in order to restrain an individual, but should be avoided if possible.

Areas marked Red should be avoided. They can ONLY be used if a guard is in imminent danger of death or serous bodily injury where the possibility of drawing a firearm is not viable to stop the threat.

Please fill in the required information below.